Skip to content
All Posts How to Use Music for Fitness 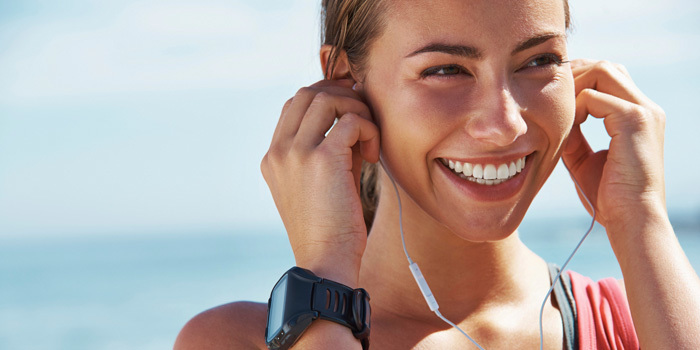 Music can have a very powerful effect on the human brain. Songs we know can stimulate memory and emotions like few other things in this world and even songs we’ve never heard before can cause us to feel happy–or sad.

Grammy-nominated Producer/Composer No’a Winter Lazerus explains how he does this. “If I’m looking to brighten a mood, I might use more major chords and instrumentation that feels safe, hopeful, joyous…For something darker, I’ll perhaps use clashing instruments or strong bass. For something sad, it can be as simple as a lone instrument played with a lost or lonely melodic arc.”

If music can make you feel certain emotions, could it be used to help you perform better when you train? Absolutely! One study, led by Dr. Christopher Capuano of Farleigh Dickinson University followed a group of moderately obese women for six months. The women followed a 1,200–1,500 calorie diet and walked three times a week. Half were permitted to music of their choice during their workout and half were not. Those who listened to music lost an average of 16 pounds and were much more likely to adhere to their workouts. Those who didn’t lost an average of 8 pounds and were only 68% (as compared to 98%) adherent to their exercise routine. Now the weight loss numbers aren’t dramatic, but considering those who listened to music lost, on average, twice as much weight as those who didn’t, it might be worth popping on a playlist during your next workout.

When we spoke with Dr. Capuano, he agreed. “Exercise is hard work. You sweat, you have shortness of breath, and if you’re obese it’s not an easy thing to do. If you’re not distracted, than those are the things you’re going to focus on. We found that music was effective at distracting the participants from the negative elements of exercise…and it makes the time go by more quickly. Most people associate pleasure with music. By listening to music when you exercise, you’re substituting pleasurable thoughts for the negative ones and what you’re doing becomes easier to do.”

That said, Dr. Capuano feels that it’s not just music that could have a positive effect when it comes to exercise. “It doesn’t have to be just music. The television could work too.” Even the environment itself could be a distraction. “I like to run outside. When I do, the fact that I can look around and breathe the fresh air and see what’s going on…those are adequate enough distractions for me.”

Another study, published in the Scandinavian journal of medicine & science in sports studied a small group of male cyclist and found that the degree of effort they exerted correlated with the speed of the music. If you’ve ever taken a spin class, you’ve probably experienced this too.

Study after study seems to show that the right music can help you get into the right pace, make you push yourself a little harder, and, if you’re not a huge fan of getting your sweat on, might even help you enjoy exercise more.

Cardio
If you’re someone who prefers to focus internally when you work out (known to sports scientists as an “associator”), you likely have no interest in listening to music to distract yourself from the art of exercise. But if you’re a “dissociator,” and want something that you can get lost in, turn to music. Brunuel University professor Dr. Coastas Karageoghis, discovered that when runners listened to music they liked, their performance increased up to 15%.

Weight Lifting:
Suffice to say, Enya is not what you want when you’re pumping iron. Aim for music that’s more intense and invigorating. In the new P90X LIVE classes, for example, the music is set to 128bpm to keep you engaged and help you get into a rhythm where you can lift to the beat. Another key thing is to choose music with lyrics that keep you “pumped.” You know, like “Eye of the Tiger.” A study from York St. John University found that when listening to music with uplifting lyrics, participants were able to hold a 2.4-lb. weight out in front of them for 10% longer.

One important thing to keep in mind is if the music is too fast you could actually hurt yourself by moving through reps too quickly. Also, you’ll want to avoid rock music that frequently changes tempo. Aim for songs 125–140 bpm when choosing tracks for your playlist.

Stretching and Yoga:
When it’s time for the cool down, it’s time to slow the music down so the heart rate will follow. Research suggests that when you’re looking to relax, you want to decrease the amount of beats to 120 or below. For a meditative type of yoga or a stretching session, try a playlist with songs between 60–90bpm.

Team Beachbody has created some mixes for you on Spotify! Click here to check them out and if you want to create your own mix, try out RunHundred, where you can select songs based on tempo, genre, decade, or source.